The flywheel, feature of every Industrial Revolution museum, could save the electricity grid with its energy storage capabilities. If you’re not an engineer (which I’m not), then you too might have got confused by the recent headlines saying that the humble flywheel is actually an ingenious green invention, a “huge step forward” in running the electricity grid on renewable energy.

With electricity, most people know:
– volts (240V mains, different on the continent or the US)
– amps (depends on what you’re plugging in, e.g. a kettle needs 13A)
– 50Hz, the frequency of the Alternating Current (current is either AC or DC).

If you get the voltage wrong, you can fry whatever it is you just plugged in. If you get the amps on your fuse wrong, you risk causing a fire if there’s a short circuit. But the frequency? It’s just as important.

In the UK last year (2019) there was a massive blackout because of inadequate power generation, which caused the frequency on the grid to drop to 49Hz. All hell broke loose, lights went out, trains stopped – it ruined a lot of people’s days.

Two major power stations suffered unscheduled shutdowns within minutes of each other – a 0.7GW gas-fired generator near Cambridge, UK, and the 1.2GW Hornsea wind farm in the North Sea.

The grid needed more power within minutes, but there wasn’t enough available at the flick of the switch. The usual back-up generators – small-scale power plant owners, battery operators and even supermarket fridges – weren’t enough, and the reserve gas-fired power stations take time to ramp up to generating temperature.

Everyone talks about batteries, big batteries like those from Tesla’s Gigafactories, or H2 (hydrogen – which isn’t available on an industrial scale yet) as the salvation of the national grid and the energy transition to renewables, or hydropower (where mountain reservoirs can open the sluice gates to let water flow down over the turbines). Here’s an earlier article on the subject.

Now suddenly Statkraft UK and GE have come up with what they call “Rotating Stabilizer” technology, which is in fact just a massive flywheel, which can be rotated at high speed, storing huge amounts of energy that can then be drawn off instantly in these types of emergency.

This now gives the grid a fourth fall-back option for boosting power when supply takes a hit. So for the brave new renewable energy grid, we now have these technologies to balance the supply:

Maybe soon hydrogen will appear on the list too. One thing is notable though – fossil fuel gas doesn’t really have a big part to play here, despite the narrative told by the industry.

An interesting point here is that it normally takes ages for industry to work out how new technologies should scale – but here, it is already being built at scale. In fact the simplicity of the technology should enable rapid adoption, not just massive installations but also at the domestic level, competing with batteries as energy storage for small wind and solar generation.

Lastly, flywheels are an awful lot greener than battery power on so many fronts. A battery is expected to last a couple of years at most, but a flywheel? It could last a lifetime. Another problem with batteries is the heavy dependence on so-called conflict minerals with dubious supply chains – no tungsten, tantalum or cobalt are required.

For energy analysts about the impact on the energy transition: 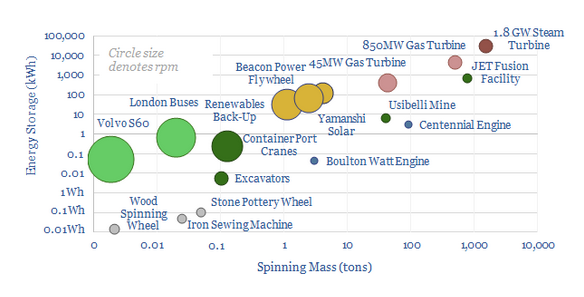